From Factory Worker to Sajangnim 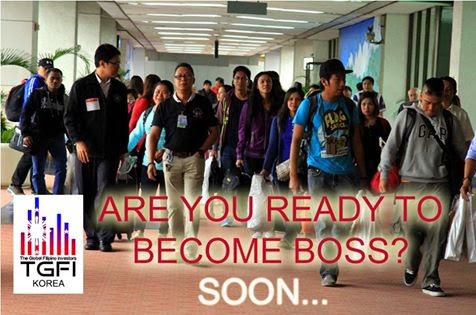 SAJANGNIM (사장님)  is a Korean word which means BOSS in English. If you are the BOSS, that means you are either the owner of the company or somebody with the highest position.

Being a factory worker here in South Korea is not a joke. Sure factory workers in Korea earn more than the Ayala employees in the Philippines, but the job is not a joke. You are going to do odd jobs that fall under the category of 3D which means Dirty, Dangerous and Demeaning.

But there’s more to life aside from being a Factory Worker.  I mean, working in a manufacturing industry is not a bad job especially if you are earning good amount of money from it. However,  I think all of us would rather want to be a sajangnim than a worker. Isn't it too much for an ambition? Why not? We can use our fate as a corporate slave for a better opportunity, and the only way for us to become a sajangnim, or an owner of our company, is to build our own business.

A big YES!!! It is very much possible. We have been hearing a lot of horror stories of OFWs from South Korea going home without money, or some even opted to stay as illegal workers just so they could continue earning money from doing 3D jobs. But there are also success stories of Factory workers who went home and established their own business and became SAJANGNIM.

In the dissertation "Status, Sacrifices and Success of Filipino Migrants in South Korea" of Pastor Jerry Yusi, a minister in one of the Christian churches here in Korea, he cited the fate of Filipino workers. He also presented in the paper the stories of successful EPS workers who made their way to build their own business in the Philippines using the knowledge and the money they saved when they were working here in Korea.  Let’s take for example Mr. Jimson Arce.


According to Pastor Jerry, Mr. Arce owns a rolling store with roasted chicken. He calls it “Jim’s Chicken on the Road.” He bought the chicken roasting equipment in Korea and adopted the technology in the Philippines.
Pastor Jerry also shared the story of Mr. Odilon Tamayo. According to him, Mr Tamayo was a factory worker in Korea. He worked in Korea from 1991-2012. He was an overstayer (TNT) for that period. He now owns a store in Baguio, a jeepney and a recording studio inside his house. How awesome is that?
These are just two of the many inspiring success stories of OFWs in Korea. There are a lot of them who started as a factory worker, and with proper discipline, knowledge and determination, they managed to step up the ladder and became sajangnim of their business in the Philippines.
How did they do it?
Honestly, I don’t know. One thing is for sure, they’re now the boss!!!
Starting a business is not simple. Money is not enough, you also need to have the idea, a goal and most of all, proper knowledge. It’s like a battlefield and requires a lot of preparation. You need to read a lot of books, observe a lot of things and attend a lot of seminars.
Korea has opened us good opportunity to work but for a limited time only. After the expiration of visa, you must be ready to face another chapter of your life, this time not as a factory worker but a Sajangnim of your own business. Start educating yourself as early as now. It’s time to build your own empire.
finance pinoy in korea Work in Korea