DMZ Tour Part 1: The Remnants of War and the Symbol of Peace at IMJINGAK

Finally! Yes, Finally! I was able to visit the DMZ together with the wanderlust friends. We actually planned this out last year but because of so many circumstances, we postponed it. However, we are so determined to tour DMZ, so we decided to really go there, by hooks or by crooks.

DMZ or also known as the Demilitarized Zone is an area in Korea that runs along the 38th Parallel which serves as a buffer between the North and South Korea. It sounds scary to some because this area has high risk of military conflicts, but for us, it sounds challenging.  We had toured 5 remarkable places at DMZ and a single blogpost will never be enough. So this is a 5 parts series and for part 1, I am going to talk about IMJINGAK.


When you take a DMZ tour, the first stop will be at Imjingak. You can go to Imjingak via bus or a taxi. If you are not paying a tour agency for this trip, you can take subway via Gyeongui line and get off at the last station which is Munsan Station. Then from there, take a taxi. It will take about 10 minutes from Munsan Station to Imjingak. There are also several DMZ tour packages available which is more expensive of course but more convenient I guess.

At Imjingak, you can see the contrast between war and peace. On the other side of the park, you will see the remnants of war including photos, artifacts and even locomotives which have been destroyed during the war in the early 1950s. On the other side, you will see a Pyeonghwa Nuri Park. It is a place symbolizing hope and peace, there are even rides and fun stuff. I may say that Imjingak is one bizarre place.

Let’s look at the area where remnants of war are placed. In this park site, you can see two historical things that played vital role during the war. One of them is this wooden bridge called Freedom Bridge which measures 83 meters long. It is called freedom bridge because during the war, North Korea released about 13,000 POWs and allowed them to return to South Korea and they walked through this bridge. The bridge gave them their freedom.

We tried to set our foot at the Freedom Bridge so we could cross to the borders and step on the soil of North Korea, but after about 25 meters, this barbed fence full of ribbons with hope messages greeted us. So that means, we could not go far up to this point. 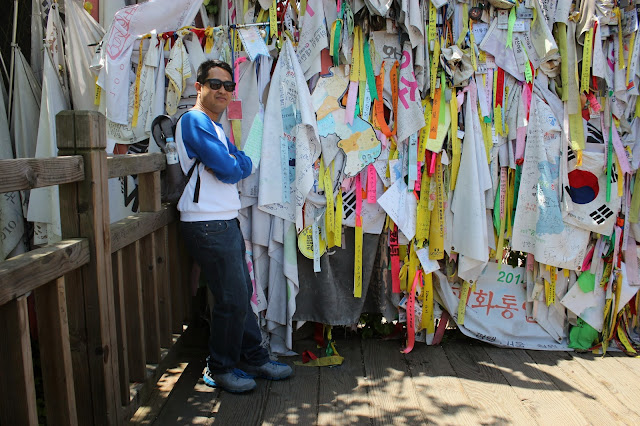 Another important item in the park is this original steam locomotive smokestack. This is considered to be the most important cultural heritage of South Korea. It was destroyed by bomb during the war and it has witnessed the tragic history that caused the division of North and South Korea.


At the entrance of Imjingak park, you will pass through the Imjingak War Memorial and this preserved locomotive will welcome you. This is the MK3 244.


This garden is under the Freedom bridge, they created this to commemorate the Korean War.


Adjacent to the Freedom Bridge is this altar called MANGBAEDAN. Those who are separated from their families in North Korea go to this altar to perform ancestral rights especially during New Year and Chuseok. Oh.... the feels..

There is also a pagoda where you can see a large Korean bell with a striker. This bell will ring once the North and South Korea will reunite. This is a good symbol of hope because it looks like they are anticipating that time will come, they will be one again.


I guess one of the sentimental objects I saw aside from the photos of war which you can see all over the area are these messages written in ribbons that are hanging in the barbed wires to prevent people from going to the restricted areas. These are messages of hope that someday people of North and South Korea will unite. But be careful, because there are some defenses installed in these barriers because nobody is allowed to go beyond the line.

You can actually see the demarcation line from Imjingak. According to the agreement, nobody from the North and South can go in the area. We are at the observatory and at our back, you will see the restricted area. No man can go to that place.

I guess we have too much emotion to carry right now. Let’s take a look at the light part of the Imjingak, the Pyeonghwa Nuri Park.


The park gives a complete opposite feel. It’s a place where anybody can just relax and enjoy especially the kids. I can see how kids love the park. They can fly kite, they can run freely and they can just play around despite the fact that this area is just few kilometers away from the enemy.

I mean, who would not feel good with this kind of view. It is indeed something you want to see in the park. That is why the locals bring their family here to not only commemorating the war that had happened before but also feel the peaceful ambiance of Pyeonghwa.


I personally like the presence of pinwheels all over the park. For me, it symbolizes peace. I like it when it is windy because pinwheels in variety of colors look like dancing and entertaining you.
Pyeonghwa Nuri is indeed a place of hope and peace.


It may look odd being situated adjacent to the heavy ambiance of war memorabilia but I guess it’s a good way to remind people of Korea that war is over and Korea is inching towards unification and peace. 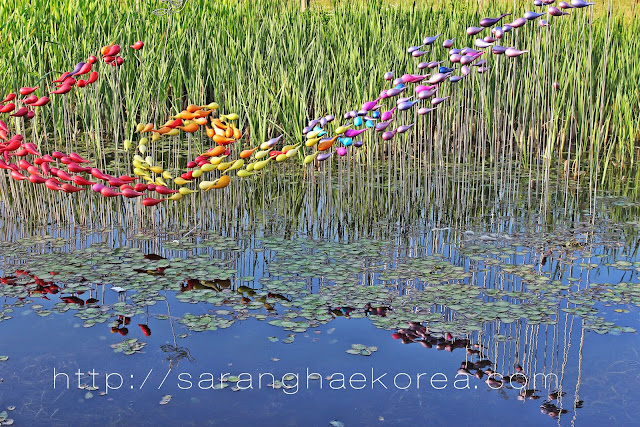 Our stay at Imjingak gave as a roller coaster feeling but that’s not just it. The DMZ tour hasn't ended yet. I have a lot of interesting stories to tell as we go nearer and nearer the soil of North Korea. This is just the first stop so stay tuned for the part 2 of DMZ tour.