on August 04, 2015
I have been to several cafes. In Korea alone, I can’t remember how many cafes I have visited. From the ordinary to the mainstream, cafes have been the option as a venue for group discussion and meetings. But what interests me more are the themed cafes that are sprouting everywhere in Korea. The most interesting so far is the Dreamy Camera Café located about six miles East of Seoul. I and my wanderlust buddies were instantly became interested to go to the place despite the distance because we are all camera lovers. It helps that the café is in the shape of a Rollieflex camera, as a photography hobbyist, I thought it would be a mortal sin not to go there. We don’t have any expectations though because we were all just after the concept of the café which is all about camera. Our goal was to go to the place and check out what it can offer to people who are into photography.

When we arrived to the place, we were in awe to the magnificent design of the building. It’s a two storey building in the form of a Rollieflex TLR. I have seen it already in the photos, but it was way different in the actual. I thought I could go home right at that instant because gazing at the building from the outside was quite enough for me. But we were already hungry that time and it was hot outside, so we decided to get inside the café to relax.

Just when I thought I have already enough of the camera café, I was overwhelmed with the number of cameras inside. I am guessing that the owner of the café is not only passionate about photography, maybe they also have the hobby of collecting different models of cameras. There are real one and even fake ones. My eyes drooled for a moment, and I was like a kid checking the cameras one by one. I don’t even recognize some of them. 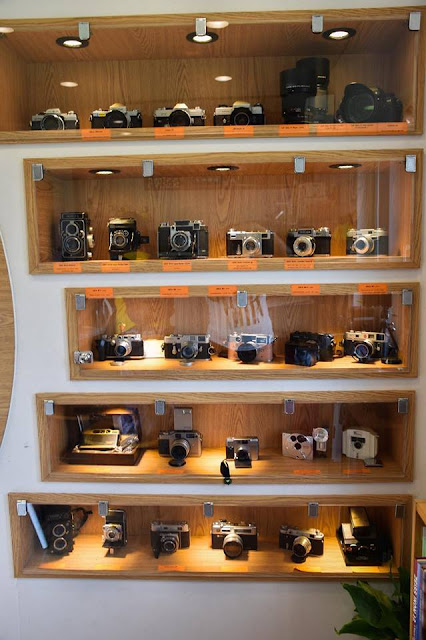 I guess the best one so far I saw was the Argus C3 also known as the Harry Potter camera. If you happened to watch Harry Potter and the Chamber of Secrets, there’s a character named Colin Creevey who brought with him a muggle camera called Argus C3 at Hogwarts. This is how that camera looks like.


However, the longer we stayed at the Dreamy Camera Café, the better we understood its real purpose. I mean, it’s not all about cameras or photography per se. When we were asked to write our bucket list in the piece of paper, I started to view the café in a different perspective. I guess what the owners would want to convey to the customers is that if they were able to materialize their dreams to build this camera inspired café, we too can write our dreams and make it come true. So our attention was shifted from the cameras to the piece of paper where we wrote our top 5 bucket list.

After writing the bucket list, the kind lady who owns the café took a photo of our list using a Polaroid camera and it will be posted in the wall of the café. This will help remind us that we have dreams to follow and if we believe, all of this will soon come true.

Aside from cameras, the interior design of the café also played the big role in giving a homey ambiance to the customers. It is one place where you can freely discuss with friends, or read books or even play board games. We do not have dull moments inside the café.


And of course, we ordered some cheesecakes and lemonade. The cheesecake is so “Daebak”, I like it so much I was able to finish it in less than 5 minutes. The prices are reasonable too. You can order for as low as 5,000 KRW. You can’t simply take away their food menu out of the equation because ordering something to eat or drink is part of the café experience. Of course, you don’t go there just to write your dreams and take photos, you must try their food too.

The couple who owned the café was so accommodating. You can ask help from them if you want to ask for directions, or call a taxi or even taking the photos. We also found out that the Dreamy Camera Café is ranked number 5 as best designed cafes in the world. Wow, that’s an achievement for them. I also like the idea that the café is located just beside their humble abode. That’s the kind of life I want to have. A simple home and a dream café just beside it located in a laid back and peaceful area. It’s just so awesome….

HOW TO GO TO DREAMY CAMERA CAFÉ?

If you want to go to Dreamy Camera Café, the address is in 341-13, Jung-won-ri, Yongmun-myeon, Yangpyeong-gun, Gyeonggi-do, Korea, Yangpyeong.

If you want to go via Subway, you can get off at Yongmun Station, that’s the last station of GyeonguiJungang Line. When you arrived at Yongmun Station, go to Exit 1. You can either take a bus or a taxi to go to the café. However, bus availability is not convenient because it only arrives one every 2 hours, so the best option is to take a taxi. In front of Exit 1 of Yongmun station, there’s a taxi waiting area, just go to that place and tell the taxi to go to “중원리 꿈꾸는사진기” , if you can’t read Korean, just show that text to the driver and they know it already. Taxi fare will cost you up to 10,000 KRW.