Where do broken shoes go? Do you give them away? Throw them away? Or just keep it!
Well, in Seoul, environmental artist Hwang Ji-hae has created a place for all well-used, broken and over-used shoes in Korea. They call this a Shoes Tree and it is currently installed at the Seoullo 7017. Ever wonder what’s the significance of this tree made of 30,000 shoes for Seoullo 7017? There are two major reasons, not that I know any other reasons, but for all of you skeptical, here are the significant factors of this shoes tree at Seoullo 7017.
For a start, Seoullo 7017 means Seoul Road 7017. In Korean, the suffix lo(로) is a direction article which is primarily used for methods, transport, tools, places and destination. Since Seoul is a place, when you say a road in Seoul or By the Seoul, you can say Seoullo. Ok enough for Korean language class! The 7017 means the two significant years for Seoullo. It was built in 1970, but it was declared dangerous in 2006 due to its old age, it was reconstructed and finally turned into a skyway park in 2017, hence the numbers 7017. But what does the Shoes Tree mean for Seoullo 7017?

Firstly, Seoul 7017 is a skywalk, meaning, it’s a walking lane in the sky. And what do people usually do in a walking lane? They either walk or run. When you walk or run, the most essential thing you should wear is a pair of shoes! It’s a no brainer. So the shoes tree is a reminder to get people for walking. 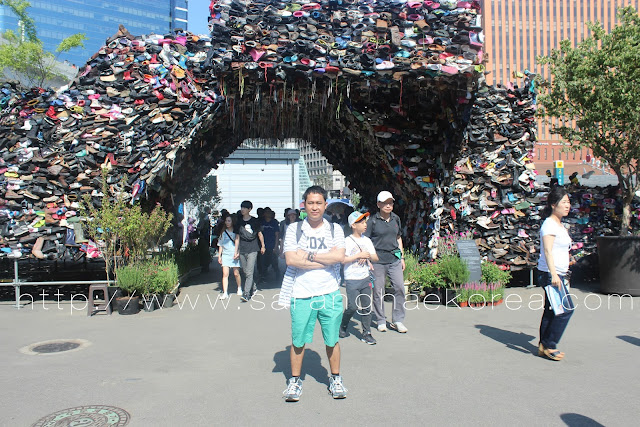 Second, the shoes tree is a tribute to the history of the place. There’s a street behind the Seoullo 7017 called Yeomcheon-gyeo which is famous for suppliers of handmade shoes. The shoes is a reminder that somewhere in the neighborhood, skillful Korean shoemakers used to exist and maybe still existing even up to these days.
It also helps that the artist is an environmentalist. He did not just recycle the used shoes, he also planted some plants and flowers inside the shoes and make it look like a little garden at the bottom of the tree. I just think it’s a genius idea.


Like any other parks, Seoullo 7017 has its own amenities to be considered as a skyway park. They planted different varieties of plants to add a forest-y feel in the area. There are fountains which children really enjoy. There are also food booths where you can try kimbap and food made of flowers.


At some point of the skywalk, there are small glass floors too where you can step on and look down to the bottom where fast cars are running on the road.


The view of the city from the top is also quite remarkable. You can see the busy street of Seoul full of people and cars and whatnot.


Will I consider Seoullo7017 a tourist spot? A park, yes! But a tourist spot? Hmmm… I don’t think so. I guess Koreans really do enjoy walking in the skywalk with their family, so maybe we can just leave this place for them to enjoy. Although it wouldn’t hurt to include this area in your itinerary and go there as a tourist, just don’t expect that much.
To go to Seoullo 7017, just take Seoul Subway and get off at Seoul Station. There are several access to the skywalk, but if you want to visit the Shoes Tree first, you can go to Exit 2 and you will smell it, I mean see it the moment you go out of the exit area.
korea themed parks korea tourism Seoul