The Showcase of Filipino Culture at the Bayanihan sa Korea 2017

on June 12, 2017
With the theme “Pagkakaisa, Pag-aambagan, Pagsulong”, thousands of Filipino migrants in South Korea gathered at the Banpo Park in Seoul to commemorate the 119th Philippine Independence Day and the 22nd Migrant Day. Branded as Bayanihan sa Korea 2017, the event was organized by the Philippine Embassy in South Korea headed by Ambassador Raul Hernandez. The Kpop singer who first became famous in the Philippines Ms. Sandara Park also joined along with Filipino local artists Michael Pangilinan and Liezel Garcia who entertained the migrants in South Korea in the said event.

The gathering of Filipino communities today at Banpo Park was a perfect manifestation of how free we are today not only from the oppressors but also to express our being Filipino even in the foreign land. As the time goes by, our sense of “filipinism” has greatly evolved and we naturally show it off especially in the gatherings like this. Maybe we can blame the media, the technology perhaps or even the millenials for influencing us as a Filipino of the new generation. If you still didn’t get what I mean, here are some attributes of the Filipinos that manifested today at the celebration of 119th Philippine Independence Day in South Korea. 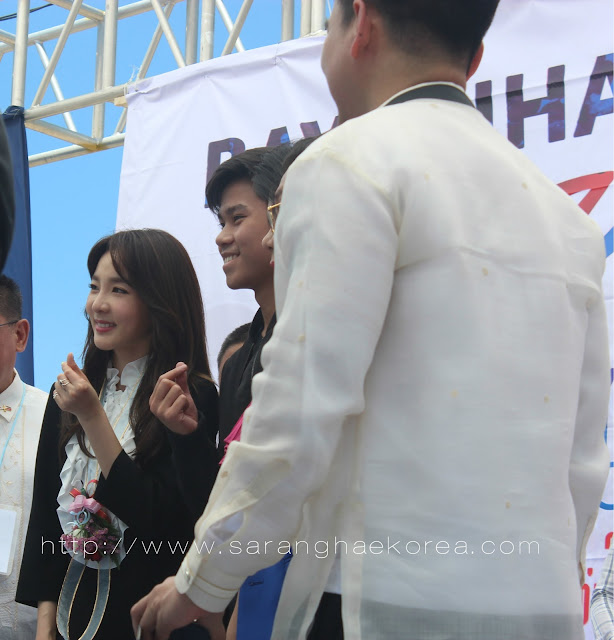 There were three celebrities present at the Bayanihan sa Korea 2017 today. There’s Sandara Park, Michael Pangilinan and Liezel Garcia. They were invited to entertain the attendees of the event, and because Filipinos are so into celebrities, most often than not, the presence of these celebrities is enough reason to attract Filipinos and persuade them to attend the event.
Sandara Park didn’t perform though because she was there as a guest. She spoke warm greetings to everyone who attended the event and she also showed a little dance move to the tune of a Filipino novelty song along with Ambassador Raul Hernandez. She also helped in the releasing of doves as a symbol of the Philippine Independence and she also received a plaque of appreciation as Friendship Ambassador for promoting good relationship between Philippines and Korea.

To keep the attendees stay until the end of the program, celebrity guests Liezel Garcia and Michael Pangilinan entertained everyone singing some of our favorite latest hits and original Filipino music. As the singers performed, everyone in the audience showed their inner fanboy and fangirl as they sang and danced along with the performers.

And of course, big events like this are not without taking pictures, or else, it didn’t happen. It’s not enough to just be there, see celebrities, enjoy and have fun, there should always be a selfie, on top of solo and group photo. In fact, selfie picture taking became part of Liezel and Michael’s performance. The goal for that day was, don’t go home unless you have a selfie with Sandara Park, or even the event stage, or whatever…..

Communities came with their respective uniforms. Whether it’s a customized printed shirt, or some generic tribal costumes, the key is, you have to look the same with the community you are involved in. That right there is a sense of belongingness which is very apparent in the Filipino culture. We just can’t live alone; we have to be with a group who accepts us for who we are and what we have. There are hundreds of Filipino communities in Korea, all for the sake of making everybody feels that they have a family away from home.

Whether food, space or even laughter and memories, we love to share everything under the sun with our fellow Filipinos. You can see how everbody shared what they can share, after all, it’s the essence of the Bayanihan Sa Korea.

Wherever we go, we always crave for Filipino food, and in a Filipino gathering events like this, Filipino food will never be absent. Think of any major Filipino dish and you can definitely find it at the Bayanihan sa Korea 2017, and of course, Filipinos were buying. 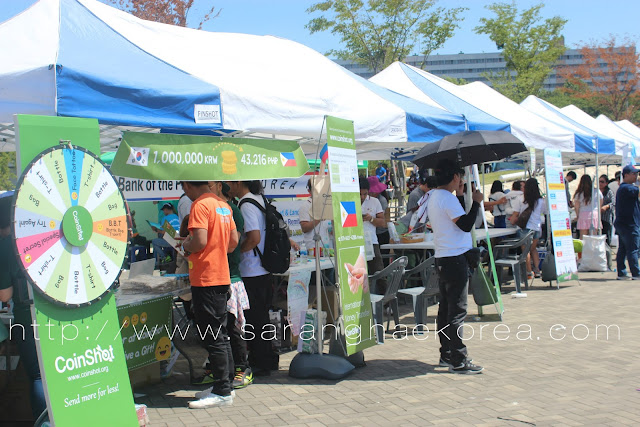 Aside from the fun and entertainment, freebies are also everywhere. There were booths for the sponsors installed at one side of the Banpo Park. Airplane company, remittance centers, tourism industry and a lot more sponsors were giving away freebies and raffle prizes for as long as you sign up to them and patronize the product and services they offer.


From the very shallow jokes of the hosts, to the little mishaps on the side, you’ll find everyone in the venue smiling and laughing. Because Filipinos are generally happy people, we can always find a way to laugh even at the small things.

Participants of a street dancing competition came with their colorful and attractive costumes not only to win the prize but also to bring festivity to the event, because we love that kind of ambiance. What better way to become festive is to bring out those ethnic attires and dance to the beat of our very own Filipino tribe.
True independence is not only being free from the oppressors but also showing our culture to the world without a hint of awkwardness. We don’t seek approval because we are what we are, we just show our culture naturally without even trying hard, and that for me is the most impressive part of being Filipino.
Events in Korea pinoy in korea