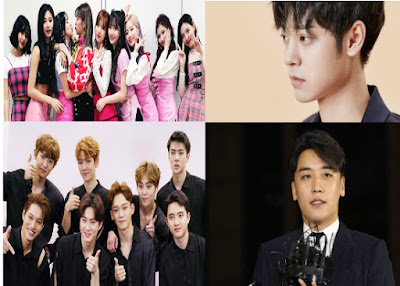 Seungri and Jung have reportedly retired in the music scene following their involvement in the controversy and are now under investigation by the authorities. However, rumors online spread like a wildfire that aside from the two kpop idols, member of popular boy band EXO and girl group TWICE are also involve in this issue.

However, agencies of the respective bands are quick to deny the rumor and came to the defense of the questioned artists. Here are the Official Statements from both agencies.

“The rumours about our artiste that are being spread online are groundless rumours, and the expansion of this false information is causing serious damage to the artiste and agency.”

“We therefore announce that we will take strong legal action against those who have engaged in such illegal actions (writing, posting, and spreading false rumours).

“We will continue to take strong legal action against such malicious rumours and ask you to actively report to us (protect@smtown.com).”

“Regarding rumours related to our artiste that are currently spreading on online communities, the judgment was made that the severity and contents of the rumours can cause serious damage to the artiste's image, honour, and character.

“As a result, we are announcing that we will seek out all possible legal actions against those who initially posted and spread (the rumours).

“We are currently collecting evidence about this matter and are discussing plans for action with internal and external law firms.

“We request that fans send in tips to help take quick action on this matter. We are once again announcing that as an agency, we are considering all possible measures and actions for the rights and interests of our artiste.”
Hallyu Wave K-pop K-Star