Enter the World of Imagination at Seoul’s Trickeye Museum

on October 14, 2016
Our idea of staying away from the hustle and bustle of the city is to go to the beach, or in the farm or somewhere that would help us escape from the reality of life. But don’t you know that in the middle of the city of Seoul in Korea, there’s a museum that could actually take you to a different dimension of the world. This museum is called TRICKEYE MUSEUM, an art gallery full of 3D Paintings, interesting statues and fun stuff.


I tagged four of my friends to go with me to the most vibrant and youthful part of Seoul in Hongdae where Trickeye Museum is located. Once we entered the building, we felt like we’re in a different world. People in Hongdae area are usually busy shopping, eating, walking and whatnot. Trickeye Museum is just like a small door to a different dimension that would help you escape the noisy street of Hongdae. Are you excited to see what’s inside the museum?

When we entered the building, the naughty teasers of LOVE Museum greeted us. As soon as we walked down the basement to the Trickeye Museum, we know we were in for a fun treat. At first we thought it’s just a small museum because it’s in the basement, but that area actually contains not only the Trickeye Museum but also the Carnival Street and the Ice Museum. Not only that, there’s a fountain, a small café, the ticket booth and a Santorini inspired corner where we gladly posed for a Gogh Painting group photo. There’s also a booth where you can wear Korea’s traditional dress Hanbok and of course, the 3D paintings on the floor and some cute stuff foreshadowing of the exciting things waiting for us inside the museum.


We first entered the main attraction which is the Trickeye Museum. When we entered the museum, there were colors of fire everywhere. At first, it doesn’t make sense, but there were sample photos posted right beside every exhibit to give idea on how it’s supposed to look like in the photo. Apparently, it’s a wooden bridge over a river of flowing lava. We figured out where we supposed to stand and we came up with this enactment.

Our first acting attempt brought out the creative juice in us. After the hot lava, the next room holds 3D paintings all related to water. Anybody can be part of the painting, there’s an area where you can position yourself and there’s also an area where a photographer must stand to get the best angle. I love this room because anything you can imagine to do in the water world is possible. There’s a big water monster dragon ready to devour anyone alive.


I also enjoyed surfing with the sharks. 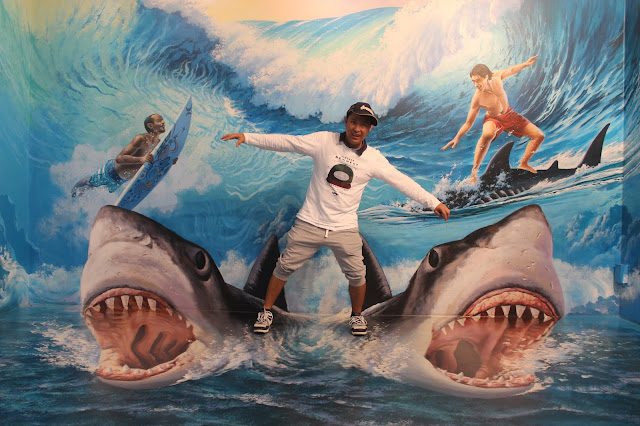 And I think riding a dolphin is a must in this room. 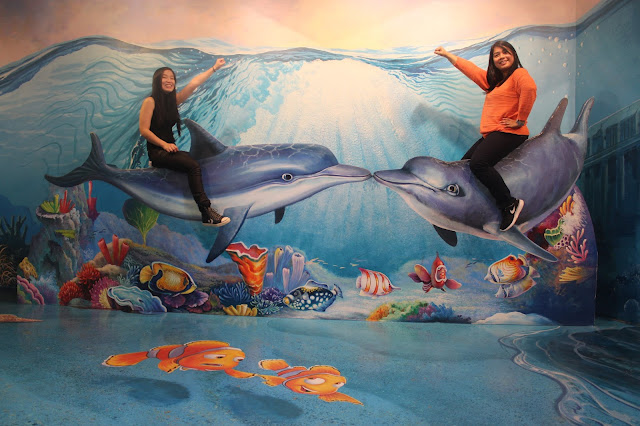 Girls can play mermaid (Or boys too). 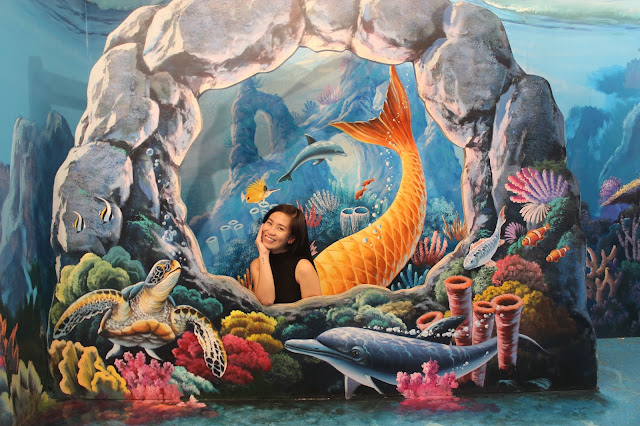 But my favorite is this white horses running in the water. It looks like adventure. 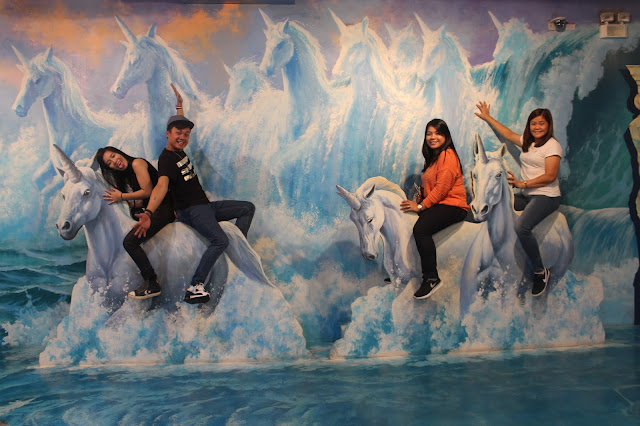 After the water world, we entered the world of illusion. In this room, we became giants and dwarfs. We also levitated. We were beheaded by the witches and we also climbed the wall like Spiderman. 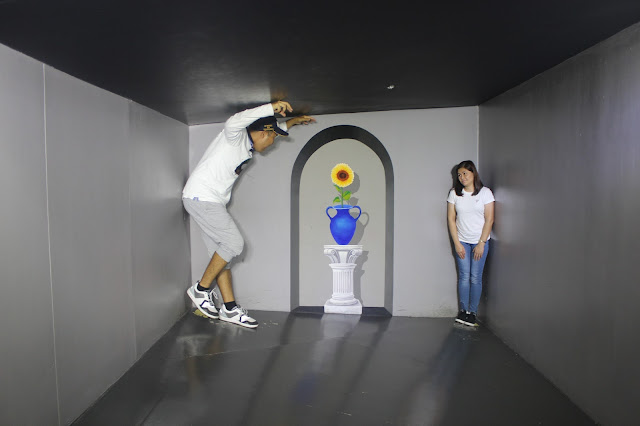 We then danced our way to the next room. Whether you can groove or not, everybody can be a performer in this room. You can ballet, you can be one of the ballerinas and you can have the night of your life at the ballroom. 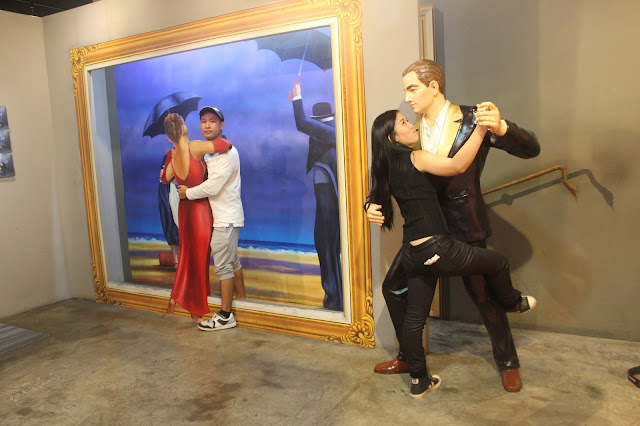 A big fish that looks like a piranha opening his mouth welcomed us as we continued our journey. We immediately planned and executed the best position we could ever dare to pose, and we came up with this amazing, fun and full of drama and adventure kind of photo. 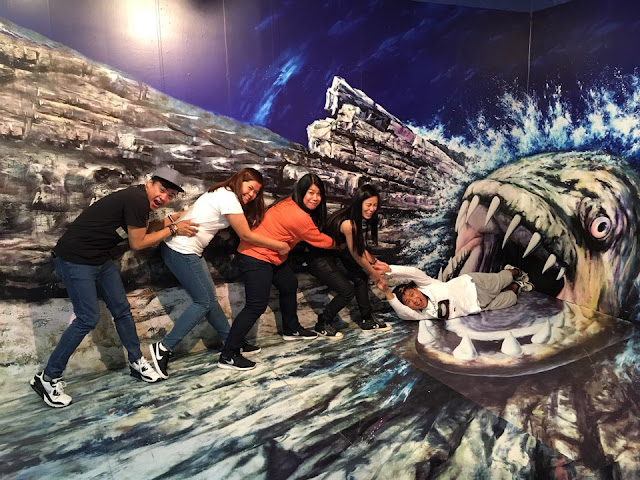 Another intense scene that every visitor of the museum must be part of is this giant snake breaking out of the wall and about to swallow the poor victims hanging upside down the ceiling. This looks like a scene from a thriller movie. 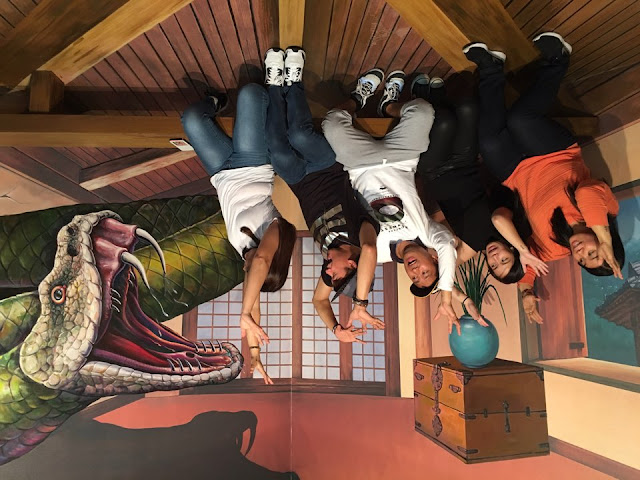 We also gladly posed with the swimmers in the pool. 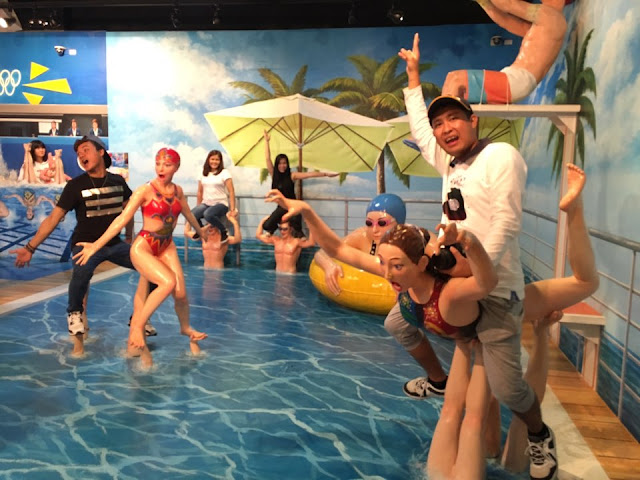 We went underwater with the fishes and whales and a giant turtle. 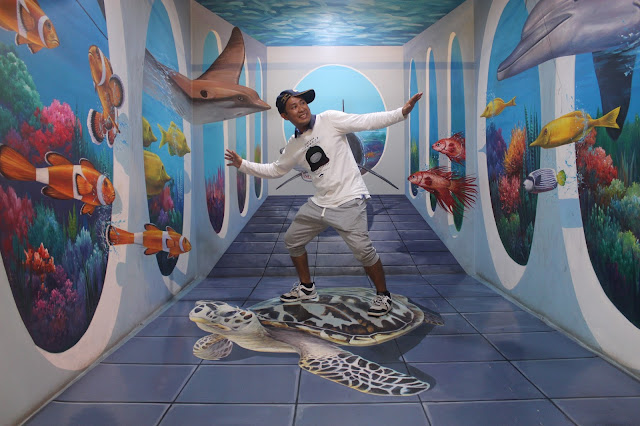 There’s also an interactive corner called Art Fighter where you can fight with Michelangelo’s David. You know I always admire David as a piece of art, but that time, I kicked, punched and knocked him down. It’s a fight between virtual and reality. Of course, I won! 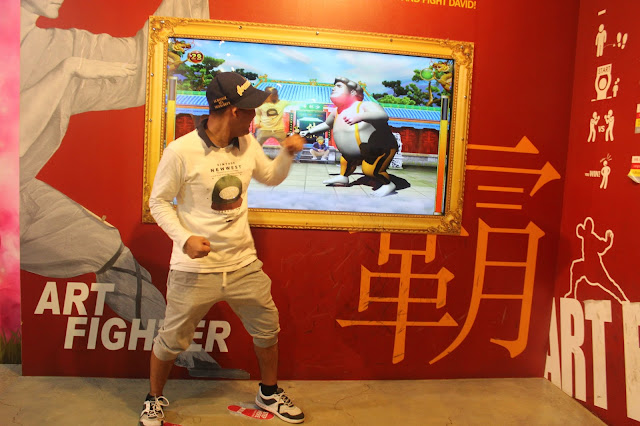 The next room was the part that made me smile because everything’s so cute. We became ingredients of the potion in the cauldron, turned into superman and peeked at the pants of a naked boy. 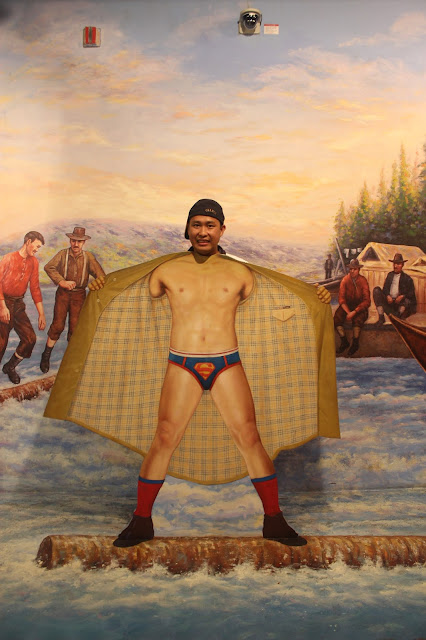 We walked further and found the cute little panda clinging on the bamboo. There’s also a big lotus flower and a boat and more… 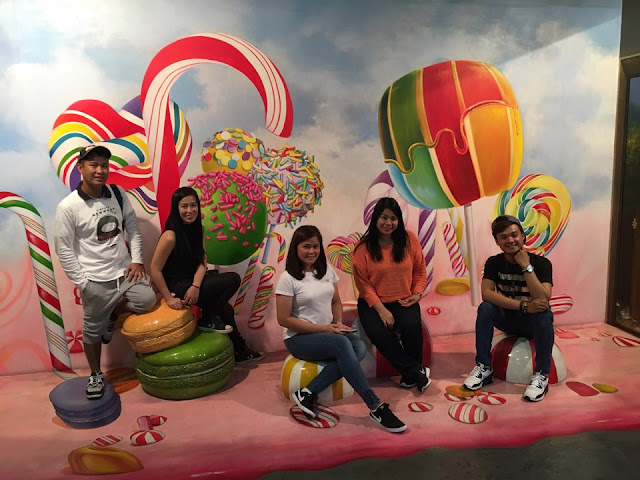 At the later part of Trickeye Museum, some paintings and 3D artworks are attributed to some sort of spirituality. There’s even an image of Buddha at the last part of the museum. The fun part was the exit. You can’t just simply walk away from the museum without going through the challenge of the mirror maze. It’s a maze, but instead of walls, you will see mirrors everywhere which make it even more difficult to pass through.  In less than five minutes, we passed the mirror maze and found the Exit. 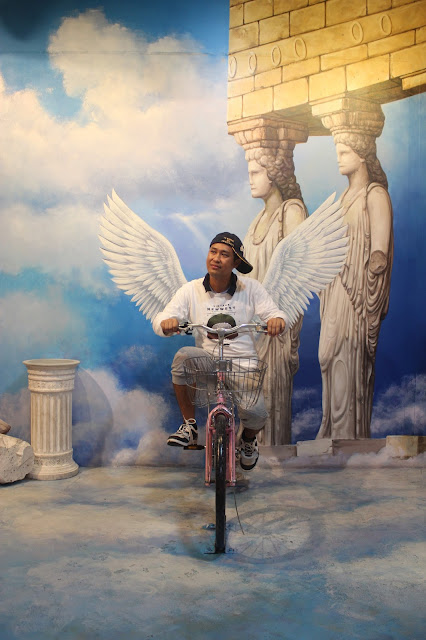 Another attraction in that basement is the Carnival Street. I thought it’s simply a room full of paintings and sculptures about Carnival, but I was wrong. When we entered the Carnival Street, there's really an actual Carnival. We tried to play some carnival games like shooting the balls in the big mouth of big clowns. 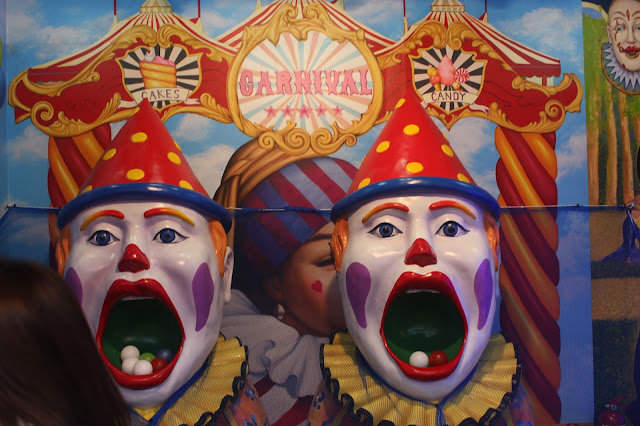 Aside from the interactive and fun games, there are other Carnival elements like the statues of the circus troupe, a virtual dance video and a lot more. The Carnival Street is indeed a great addition to this museum. 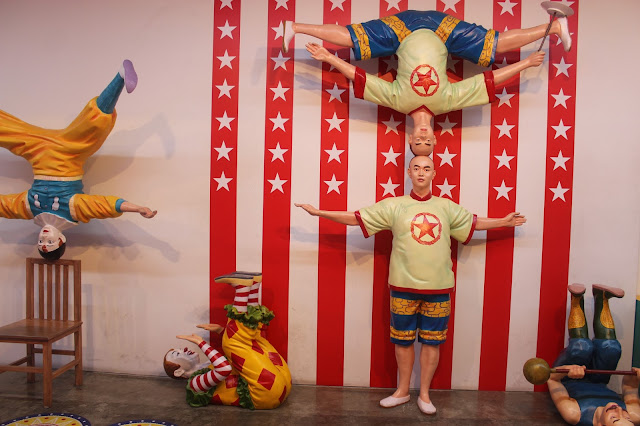 We were so interested about the Ice Museum too. It's in one corner of the basement, just in front the fountain. There's a Korean lady distributing a sheet of clothe to every person entering the Ice Museum. We have idea that it could be cold inside, but when we entered, it was so cold, like winter. We were chilling inside the Ice Museum.

Despite the cold temperature, I'm guessing it's below zero degree, we were able to take some photos in different part of the room. We were greeted by some Christmas characters like Santa Claus. 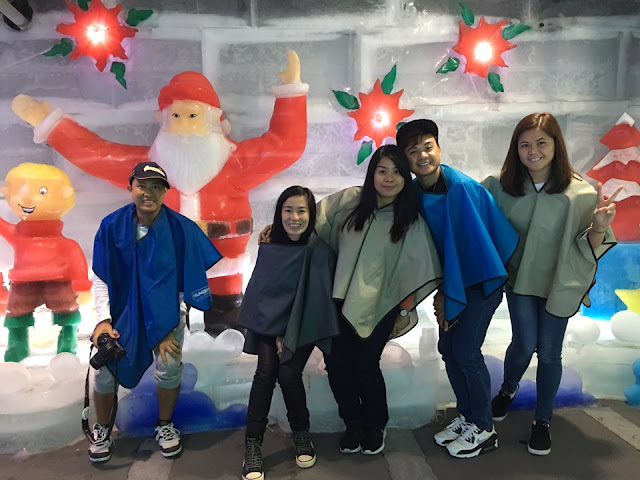 Inside the room, there's a room made of ice, there's bedroom, kitchen and the comfort room, all made of ice. So we chilled (literally) a little bit in the sofa made of ice and pretended we were in an actual house. However, the cold bothered us anyway that we decided to let it go and exit the Ice Museum. 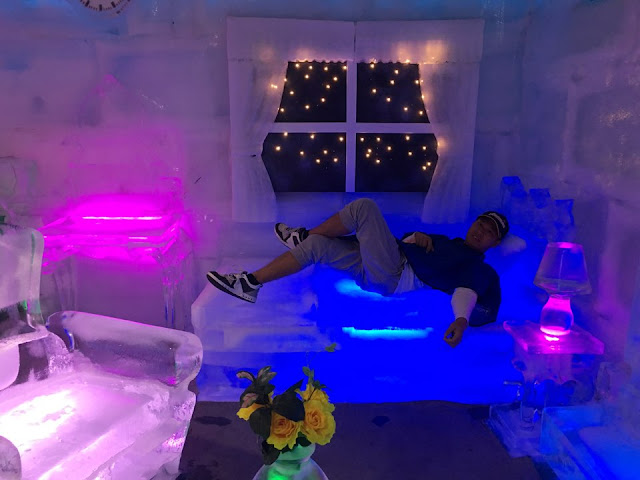 We had so much fun that we didn't notice we spent around 3 hours inside the Trickeye Museum. On the ground floor, there's still Love Museum, a part of Trickeye Museum but it's in the naughty side of the spectrum. I believe it deserves a separate blogpost so I am going to talk about it separately.

Anyway, if you want to visit Trickeye Museum in Seoul, CLICK HERE to get the detailed instruction on how to go there via Subway. If you have your own car, you can head on to this address:

When you go to Trickeye Museum, don't forget to bring camera or prepare some space on your phone storage, a wild and creative imagination and most of all, a happy heart.